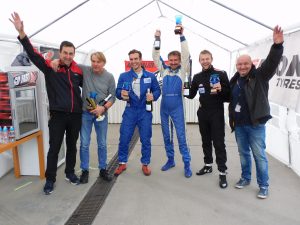 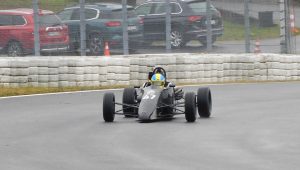 Under the banner of the AvD Historic race Cup the FFR-FOR had joined forces again with the HRA, bringing 34 classic single seaters on the track. With the HRA and FFR-FOR starting in two separate groups, Marvin Brandl (GER) took first place in the Formula Opel class, with an impressive fourth lap time behind three HRA Formula 3 cars. In the FF 2000 class Max Wuttke (GER) was a clear winner while Klaus-Dieter Häckel (GER) dominated the FF 1600 class, followed by Matthew Dean (GBR) and Roel Mulder (NED).

The second race on Saturday, which unfortunately had to be terminated early as track time ended, saw plenty of action. In the Formula Opel class Jochen Thissen (GER) claimed second place behind Marvin Brandl, starting from the 14th place on the grid after suffering mechanical issues in the first race. Equally impressive was Jo Zosso (CHE) in his Ray GR Z98. Coming from the 15th place on the grid after his throttle cable broke in race 1, he was a close second in the FF Zetec class behind David Schneider. Alan Williamson (GBR) won the FF 2000 class after Max Wuttke, who was in the lead, decided to pull into the pit due to spongy brakes, while Klaus-Dieter Häckel scored another win in the FF 1600 class.

Race three was offered as a race without championship classification and 24 drivers took the chance to complete another 20 minutes of racing at the Hockenheimring. This time, both the HRA and FFR-FOR participants started in a single starting group. HRA driver Elio Cocciarelli managed to secure first place with a Formula 3 car, after beating Marvin Brandl in his Formula Opel. Bernd Suckow and Jochen Thissen, also driving Formula Opel cars, finished in third and fourth position. Klaus Dieter Häckel (FF 1600), Max Wuttke (FF 2000) and David Schneider (FF Zetec) were able to celebrate another class victory on Sunday. The next racing event, the last of the 2021 season, will see the HRA and FFR-FOR again at the Nürburgring during the Westphalia Trophy from 15 to 17 October.

Zandvoort (Netherlands), Achel (Belgium), 19 July 2021 – It was a weekend of contrasts for the FFR-FOR at the Zandvoort Race Classics, held from 16 to 18 July at the track that will host this year’s Dutch Grand Prix. Again joining forces with the HRA (Historic Racecar Association) under the banner of the AvD Historic Race Cup, the FFR-FOR had two uneventful qualifying sessions on Friday.

In the first race on Saturday morning however, a large number of cars had missed the pre-grid and were starting from the pitlane. The mêlée that followed resulted in a lot of near and actual race incidents, several Code 60 and safety car situations, with ultimately 4 cars not able to continue the race. In the end the winners in the various FFR-FOR classes could be declared. Klaus-Dieter Häckel (GER) with his VanDiemen RF91 won in the Formula Ford (FF) 1600 class, Max Wuttke (GER) with his Reynard SF86 in the FF 2000 class, Pascal Monbarron (SUI) in his Reynard SF86 was the first FF Zetec to cross the line and Marvin Brandl (GER) came first in the Formula Opel class.

The second race on Sunday on the other hand was exemplary. Under excellent racing conditions there was a lot of competitive action without any incidents, making it another great track day for the FFR-FOR. Winners were Klaus-Dieter Häckel (GER) with his VanDiemen RF91 in the Formula Ford (FF) 1600 class, Max Wuttke (GER) with his Reynard SF86 in the FF 2000 class and  Pascal Monbarron (SUI) in his Reynard SF86 in the FF Zetec class. In the Formula Opel class Georges Tomsen (BEL) took his first win this season, with Jochen Thissen (GER) second and Marvin Brandl third.

Compliments go to the organization of the Zandvoort Race Classics for pulling together a very interesting programme on one of the best loved tracks in the FFR-FOR programme.  After the summer the FFR-FOR will be back at Hockenheim for the ADAC Racing Weekend, 17 to 19 September.

Hockenheim (Germany), Achel (Belgium), 10 May 2021 – It was an impressive line-up of formula cars on Saturday 8 May. The FFR-FOR formula cars joined forces with the HRA (Historic Racecar Association) for two races at Hockenheim, as part of the FHR Spring Classic. More than 35 formula cars were on the grid; an impressive number since drivers from the UK, Denmark and the Netherlands are still not able to join because of Covid restrictions.

In race 1 the HRA group got onto the track first, followed 30 seconds later by the FFR-FOR Formula Fords and Formula Opel Lotus’. After the rolling start it didn’t take long for Marvin Brandl (Formula Opel), Max Wuttke (FF 2000), Jo Zosso (FF Zetec) and Georges Tomsen (Formula Opel) to catch up with the slower of the HRA drivers, resulting in an attractive and competitive race. At the end of the 1st race Klaus-Dieter Häckel won the FF1600 class, Max Wuttke the FF2000 class, Jo Zosso the FF Zetec, while Marvin Brandl took the first prize in the Formula Opel class.

In race 2, in the jostling for position after the rolling start, an unfortunate incident occurred when the tyres of Jo Zosso and Sarène Ziffel (FF Zetec) rubbed. This caused her to spin and collide with Georges Tomsen (Formula Opel), leading to a red flag situation. Luckily no one was injured, but it took a while for the race to recommence.  After the restart race 2 pretty much mirrored  race 1, with a lot of action of the track and the same class winners.  Interestingly Julian Labitzke (FF Zetec) managed to get on the podium as well on his first race day ever, with a 3rd position in race 2.

Racing conditions were excellent making this another great track day for the FFR-FOR, also thanks to the cooperation of the FHR organization and HRA. Next the FFR-FOR will move to Most Autodrom in the Czech Republic, for the European NASCAR event on 18-20 June.

Hockenheim (Germany), Achel (Belgium), 17 April 2021 – Under perfect racing conditions, Marvin Brandle from Germany dominated the FFR-FOR field in his Formula Opel Mk.II, closely followed by Pascal Monbaron from Switzerland in his Formula Ford Zetec, in both races for the ‘City of Stuttgart Trophy’ held at the Hockenheimring on 17 April. Behind the two leaders it was a closely fought race with many racing cars  juggling for positions.

After so many races last year having to be cancelled due to Covid, the FFR-FOR drivers were happy to be out on the track again. With seventeen cars the field was a bit smaller than usual, as several drivers were unable to join because of travel restrictions, but it was enough for two interesting races and for the drivers to have fun. The next FFR-FOR track day will be held again at Hockenheim, on 8 May, as part of the FHR Spring Classic.

Although the event had to be held without spectators, the MSC Stuttgart has to be congratulated for organizing a great racing event at Hockenheim. The track days saw an interesting mix of racing classes, ranging from the ‘Fighting Dwarfs’ to sportscars to Porsche GTs, as well as the formula cars of the FFR-FOR.

Burladingen (Germany), Achel (Belgium), 3 November 2020 – As of the 2021 season the classic Formula Opel and Formula Ford racing series in Germany, the Benelux and France, as organized by Sportservice Richter, will come under new management. Frank Richter and his wife Karin have decided to hand over the series to Wilco Ibes from VIT Race & Tyre Services NV, already involved as a service supplier to both championships.

“After 11 years of organising the FFR and FOR racing series it is time for us to say goodbye,” says Frank Richter. “We would have loved to tell our participants at the championship celebration that we had planned at Hockenheim, but unfortunately we had to cancel that event due to Covid-19. However, we are very anxious that the racing series continue. We think we have found a great successor in Wilco Ibes from VIT RTS, who is already well known and trusted by the teams for the technical support of the FFR and FOR series. We wish Wilco all the best for the future.”

“I am very proud of the confidence Sportservice Richter have placed in me to make the FFR and FOR  series an ongoing success for the participants,” adds Wilco Ibes. “Frank Richter and his wife Karin have been instrumental in building the series over the past years. We are now very busy working with Frank to make the transition as smooth as possible. The 2021 season has already been planned and drivers will receive their calendars soon.”